If I Be Male Artiste, I Will Have Like 5 Baby Mamas – Tiwa Savage

Nigerian star singer, Tiwa Savage has revealed she would have had 5 baby mamas if she was a male singer.

She made the confession on her Insta story.

The star was reacting to the massive love she got during her concert in Sweden.

According to her, female fans have shown her mega love.

If she was a male artist, she would have taken the opportunity to have at least 5 baby mamas.

She wrote: “The way girls love me, If I be male artiste I will already have like 5 baby mamas. Ok scratch that. My male fans dey para too.” 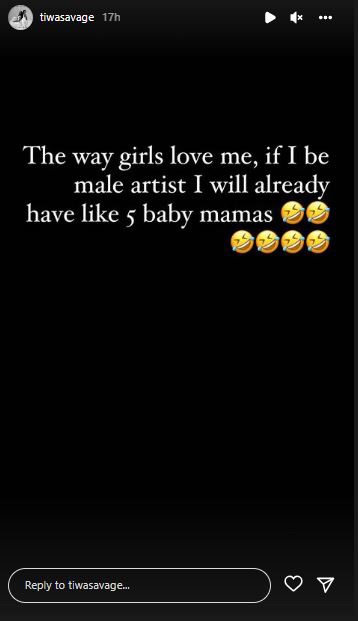 Tiwa Savage – Once Upon a Time (Full Album)

Bob Marley - Baby We've Got A Date (rock It Baby)

Bob Marley - All Day All Night