CKay has sent a reminder to music fans and the industry at large as he lists some of his achievements since "Love Nwantiti" became a global hit and also announced a Lagos show in December.

Prolific Nigerian singer and Afro-Emo frontrunner, Ckay has sent a reminder to the music industry on the impact of his sound globally and had in the same vein, announced a show in Lagos this December.

CKay had spoken about his achievements in other parts of the world, stating that he'd proved the naysayers wrong by moving past his smash hit record, "Love Nwantiti". The singer had made these statements via a Twitter thread saying, "Been on tour for the past two months and it’s crazy how my audiences were like 80% non-Africans! It’s almost like they love afrobeats more than us now. North America and Europe showed up!"

He also glossed over the streaming farms outcry by adding: "No streaming farm can buy this type of love. Plaques full my crib. Very few can brag of this so I will never take it for granted. I appreciate all my fans who genuinely support me and prove to the world that what is real will last." 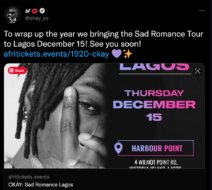 The singer finished off his thread by announcing his forthcoming Lagos show which is set to happen on the 15th of December and falls under the African leg of his Sad Romance tour which he kickstarted on the 1st of October.

BBNaija: This is what previous winners are up to now