“Femi Brings Girls To His Matrimonial Home Whenever His Wife Is Not Home”- Singer, Oritsefemi Accused Of Infidelity

Instagram blogger, Gist Lover, has alleged that singer, Oritsefemi’s marriage is under siege as his wife, Nabila, has been sleeping outside their matrimonial home for some time now.

Apparently, the marriage of three years is going through a crisis as he is being accused of infidelity by Nabila, which led to a heated argument and a fight after Nabila discovered that the singer has been bringing women to their home whenever she is not around.

According to Gistlover, a messy confrontation erupted in the house making Nabila run out of the house to hide in Nollywood actress, Caroline Danjuma’s house in Banana Island.

“She’s been in Caro Danjuma’s banana island house for a while now,Manila’s cloth box is in her son’s room,she had a had a messy fight with uncle oritsefemi the wandering prick which landed her in the hospital, she came from the hospital to caro’s house.

Femi brings girls to his matrimonial home whenever his wife is not home,wife got a wind of the gist and everywhere scatter scatter.The way marriages folds up these days is something else o,i come in peace,Ambulance will not jam us run o” GLB wrote on their IG page.

Oritsefemi responded to the post by lashing out at Caroline, prompting her to be set as this is the genesis of her life’s problems.

“Caroline this the beginning of your problem in life, get ready for it.” he wrote. 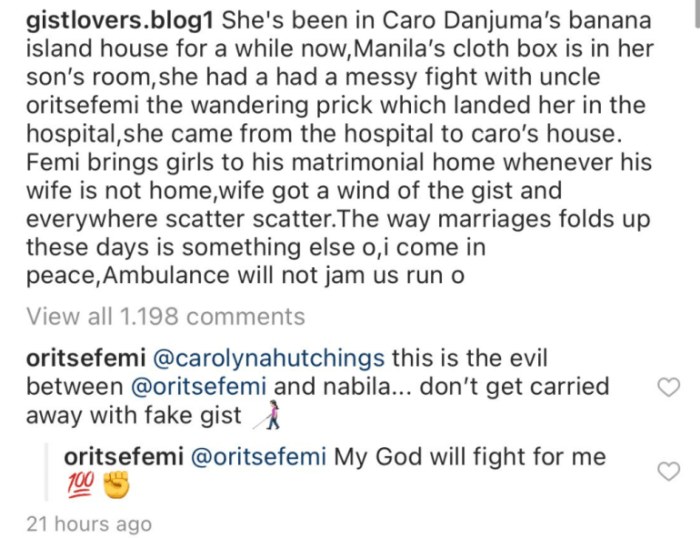 #Grammys2022: A Quick Look at Nigerian Nominees and Contenders

“Precious Use to Chase FFK Around With Knife, She Has Spiritual Problem” – Deji Adeyanju

Singer Burna Boy’s Signee, Buju, Accused Of Infidelity And Assault By His Girlfriend